There's One in Every Family - Treasure of Treasures

Jasia's dedicated work with the Carnival of Genealogy and her fabulous 100th Edition celebration has inspired me. My first effort focused on a colorful ancestor, but I kept thinking of a newfound treasure. As a long-time family history researcher I've dreamed of THE find - a letter, Bible or family record hidden in a trunk or closet that unlocks the past.  I've had some successes, but none more exciting than when I learned recently that my husband's aunt has an 1832 family Bible.  Once I picked myself and my jaw off the floor I spent a few hours photographing and poring over Leonard Smith's Bible. 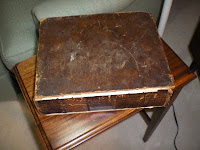 Leonard Smith is my husband's gg grandfather. He was born 29 March 1794 to John and Elizabeth Fenwick Smith and died 2 July 1849. Leonard married Eliza Jamison on 3 Oct 1815. Eliza was born 19 December 1795. While I've had these dates before, I have never been able to adequately document the information. I suspected the dates were from a family Bible, but had no idea which Bible or where it was. Now I know.

An aside - my husband is from a large extended family and our visits have often been group gatherings. This trip we had a chance to visit quietly with his aunt and it was then that she remembered the Bible and other documents she had stored. Moral of the story - find some quiet time to talk to the senior members of the family!

Leonard's Bible includes a family record of both his parents' children and his own children. But it also held a number of papers tucked in its pages that give a fuller picture of the family.  Included are a number of certificates of prayer intentions for the family, confirmation and first communion certificates, sheet music for a Confederate song, and a lace-trimmed prayer written in 1852 for Rev. Mother Delphina, who I quickly discovered was a Carmelite nun and Leonard's sister (born Elizabeth Smith). 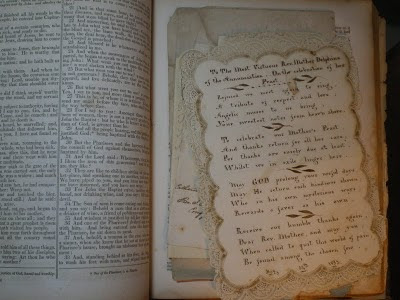 An 1833 first communion certificate for Leonard's daughter at St. Joseph's may help locate the family in the 1830 census (though not as yet).  Inside the back cover are still to be analyzed pedigree charts for the family. It's a Smith family treasure trove of information that I will happily be working on for months to come. I could not be more grateful that this one is in the family! 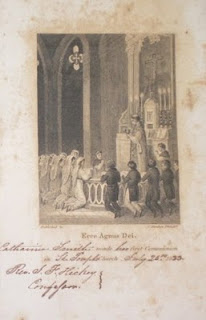 Submitted to the 100th edition of the Carnival of Genealogy.
Posted by Susan Clark