My entry for Jasia's 103rd Carnival of Genealogy is a composite of recent posts about my grandmother, Anna Pereksta (1895-1982). Her story is not uncommon. She was part of the wave of peasants who left Europe for the factories and mines of the United States. The photo is actually from Finland, but accurately depicts the life she left.

She lived all but eighteen years of her life in Binghamton, NY, but it is impossible to think of her as entirely American. She grew up a 19th century peasant on easternmost edge of the Austro-Hungarian Empire. She died late in the 20th century, having seen men walk on the moon from her living room couch.

You can read her story on these pages.

There are additional photographs of Anna here and here. And here ... 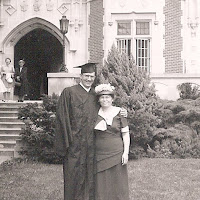